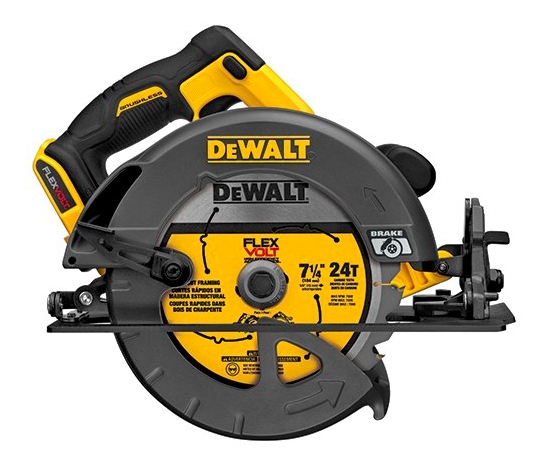 One of the biggest sellers in the power saw market, circular saws are becoming an increasingly popular choice for a wide range of projects due to their cost-effectiveness and versatility. So if you’re looking for a tool to aid you in tasks from bevelling, plunge cutting, ripping and cross-cutting, a circular saw is just the ticket.

In this post we have narrowed down the best circular saws money can buy, and compare our favourite two models currently in the market.

With a brushless motor that is capable of running up to 5800 RPM and a carbide-tipped blade, the DeWalt DCS575B will provide you with quick, effortless and high-quality cuts time and time again.

The 7 1/4 inch diameter blade ensures easy cuts through 2 inch or more thick lumber in just one pass, and tilts up to 57° to allow for slick angled cuts.

So, whether you’re a professional or DIY enthusiast, this saw would make a great addition to your tool set, ensuring quick and easy jobs.

Breakdown of Features Include:

“This this just surprised the hell out of me! I cut 3 2x4s simultaneously and it didn’t even pull down like my corded saw would have. LOTS of power.”

“Very powerful saw. You’ll be hard pressed to tell the difference between this one and a corded model.”

“Dewalt has a winner with this saw. I agree with other reviews that the saw is just as powerful as a 120 volt corded saw.”

“My wife got me this for Christmas last year and needless to say I have found every possible reason to use this bad boy. I have yet to find anything that it struggle with! Better yet , when combined with a flexvolt battery I have only had to charge it once so it is efficient with how it draws from the battery. The led light works like a dream and shines the way of whatever you are currently working on. There is a very clear line mark in the metal that helps you line the blade up perfectly with your mark. It feels great in the hand and well balanced. There is also a hook that you can flip out which I love because it makes hanging it from my pegboard so easy. Another quality product from dewalt. If you are contemplating buying, just stop , and buy it!” 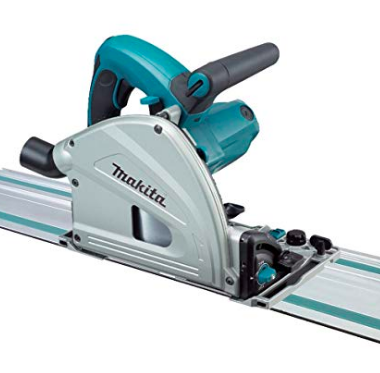 Made from magnesium components, the SP6000J1 also carries less weight than other saws on the market, allowing for added ease of use and comfort – ideal for use in workshops, on jobsites and DIYers at home.

Breakdown of Features Include:

“One of the best purchases for my woodshop, period. Does everything that I need it to and the included blade is of amazing quality. I’ve never had such tear-out free plywood before that I can actually consider using it as finish cuts rather than rough cuts for breaking down panels.”

“I’m a builder/woodworker with 40 years in the trades. Like most Makita tools I own (30 + tools) this is a solid tool. It’s great for the Arts & Crafts style case work I do, compounded post with the tilt lock is so easy, as is beveling doors.”

“The saw is fantastic! I purchased approximately two months ago to help break down 3/4″ plywood to be able to cut into further pieces on table saw. Saw cuts nice clean straight cuts everytime. I plan on using this to make many cabinets and shelves. I would buy again.” Bryan Chestnut, Amazon Reviews

“Excellent tool. Game changer. Wish I had bought it sooner.”

Of course when considering circular saws, power output should be one of your main concerns.

When comparing the DeWalt DCS575B and Makita SP6000J1, DeWalt has pretty much nailed the power output with their Flexvolt technology. The Flexvolt batteries used in the DeWalt saw can be used on many cordless Dewalt tools, with voltages easily swapped depending on the requirements of the tool you’re using – they can run at either 60v or 120v.

Of course, not forgetting the output, running up to a beastly 5800 rpm, compared to the Makita saw reaching up to 5200 rpm, there is plenty of power to ensure clean cuts time after time.

It seems that when comparing power output, it is difficult to differentiate between using the DCS575B and a corded alternative.

Your circular saw has two options when it comes to power systems – corded and cordless.

As mentioned above, the DeWalt DCS575B features the flexibility of cordless, with the power of corded. Cordless saws are not everyone’s first choice, usually due to compromises that must be made for reduced power. However, with the DeWalt, you are given the best of both worlds.

Although, it’s still not for everyone, the Makita SP6000J1 is a corded model and isn’t far behind in terms of power output. The saving grace with a corded model is the elimination of the worry of battery life and constant need of charging. With a corded model, you’re always good to go and ready to get the job done.

Comfort, Weight & Ease of Use

Both models are, without a doubt, some of the most comfortable saws on the market today. You might be wondering what difference the weight makes, and whilst you think it may not affect you, you’ll be surprised at the effects after you’ve made a few hundred cuts.

For both the DeWalt and the Makita, the centre of gravity is directly on the trigger, whilst the handle is angled to allow an easy grip – without having to twist or turn your wrist in awkward positions – and the handles themselves are covered with a rubber coating to improve grip and comfort when holding.

It can be said that the DeWalt is a heavier tool, as circular saws go but nothing above average. Weighing in at 10.1 pounds with the battery attached, compared to the Makita saw at 9.7 pounds, it could be argued that the Makita sports an easier grip and is much more effective for long jobs and regular use. However, one benefit to a slightly heavier saw is the pressure it mounts onto the material being cut – it means less effort is to be maintained during use, alleviating some of the extra weight.

So, which is the Best?

Whilst both saws have so much to offer in terms of power, durability, accuracy and comfort, they both have their pros and cons.

It could be said that the DeWalt saw is a better choice for professionals, offering up a larger blade and higher power than the Makita, with the capability of running up to 5800 RPM , 18V and a bevel capacity of up to 57°. However, some users have said the depth scale could be made easier to read, and the shoe can sometimes get caught up on rough materials. It’s also slightly heavier than your average circular saw, so may be a little hard to get used to if you don’t use these bad boys often.

The Makita saw isn’t far behind in terms of power and offers up the traditional corded design. The cord itself can be viewed as a set-back, reaching the length of just 8.5 feet, but this is no disadvantage in a workshop or on a jobsite. There’s also no need to worry about battery life and charging either.

In the end, it may just come down to an individual’s preference, whether they’re looking for more power, or more accuracy. Corded or cordless. A large blade, or a smaller compact blade that is easier to maneuver.

Consider the job in question, and compare our contenders with a breakdown of features below.

Of course, Dewalt and Makita aren’t the only pro tools we keep in the workshop. Their range are excellent, no doubts about that but we enjoy the services of other tools made by equally capable and reliable manufacturers who offer great value for money. 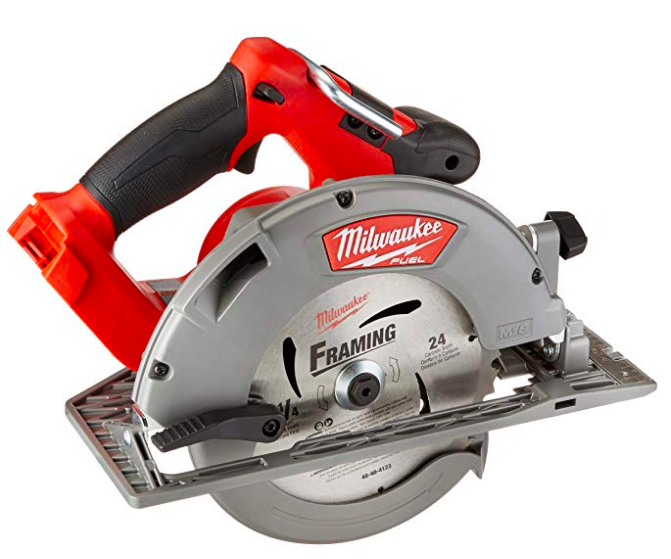 A strong competitor on the circular saw market today, the Milwaukee 2731-20 takes up tough cutting applications with ease, combined with durable magnesium construction.

“I’ve had this tool now for about a month and it is exceptional in quality and performance. I do general contracting and it goes all day long on the job. I’ve also purchased the Milwaukee impact driver and hammer drill. I use the M18 xc batteries and they go all day long. Very impressed with Milwaukee quality and performance. Five stars isn’t enough.”

“Great saw, it actually has a really good stopping speed as well. I was a little surprised by the weight and bulk of it, but immediately got used to it. Feels incredible, and works even better.” 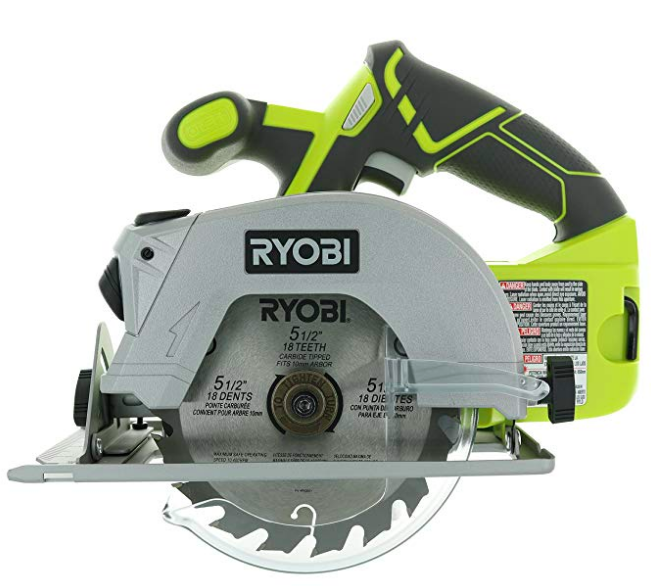 The Ryobi P506 is perfect for DIY enthusiasts with smaller budgets, with limited willingness to compromise. It’s a powerful piece of machinery that combines portability, accuracy, and power, ripping through most woods at 4,600 revolutions per minute, and despite it not reaching our top two models, it’s a strong competitor that deserves an honourable mention.

“This saw is the cat’s meow. It’s not only portable, it’s light and a little smaller than a regular size saw. It will maybe just’ saw a 2 x 4 completely through. Great saw.”

“I have a Makita battery powered circular saw but I like this as well for half the price. It might not be the quality of the Makita, but it makes up for it in being lighter. Has worked fine for me cutting 2×4’s which is about as deep of cut as I need.”