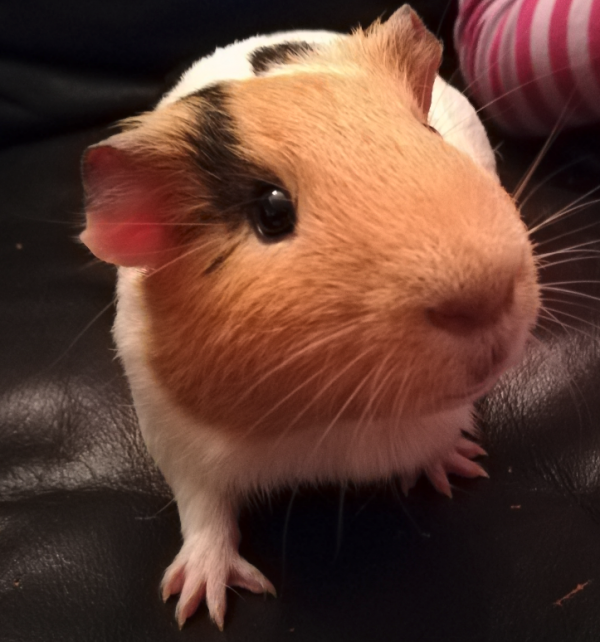 The conditional agreement over Christmas was the 5 year old could get a couple of Guinea Pigs for her birthday in April. Being 5, she inconsistently adhered to conditions of the Christmas agreement violating a number of clauses set out in the T’s & C’s.

This lead to the inevitable addition of the unconventionally named, Saturn and Jupiter on her big day. Before the pigs arrived a self-assembly hutch from eBay was bought.  I left it to the missus and her dad to set it up.

And it was a set up all right.

About as sturdy as the groom on his wedding night this excuse for a hutch was all falling about all over the place. Their feeble attempts to fix it together only resulted in other bits dropping off before the whole thing just fell apart. It was like watching a game of vertical twister crossed with Rubik’s Magic. There were hands and feet everywhere, working desperately to keep this thing in what should have been a cube.

I don’t think I heard her dad swear before that day.

After about an hour of faffing about it finally succumbed to its inevitable fate and collapsed in a crumpled, sorry heap. I lead the futile attempts to resuscitate. Only more annoyance, frustration and cursing was the sum total of that exercise.

Father-in-law, who conveniently side-stepped from the action suddenly had a finger snapping moment (I was amazed this didn’t happen sooner) and volunteered my services to build one from scratch! ‘You work with wood, why don’t you knock one up’ were the words of wisdom arrowed my way.

Torn between correcting his idea of what I actually do and fumbling around for excuses I ultimately said nothing prompting the missus to pipe up in full support of her dad’s brilliant suggestion.

Two days later I was off picking up materials to ‘knock up’ the new and improved hutch for our intergalactic arrivals. My only condition, after coming to terms with my plight was to have someone to work with. A guide. I had a very rough idea about the needs of the Guinea Pig but leaving it to me alone to construct would not have been the best.

Feeling mildly guilty albeit very supportive this task fell to Hannah who so enthusiastically bought the pigs and voted me in.

This design allowed the hutch to be split over two floors with a ramp giving access from the ground floor to the upper level. There would be 4 doors, 2 solid/2 meshed and the hutch itself raised 4-6” off the ground. One section would be more-or-less closed from the elements allowing the pig to stay relatively warm in the winter months.

The toughest and safest materials for the hutch was was 18mm ply. Very sturdy and rigid, would easily survive rain & snow.

Used 3 coats of animal safe paint internally and externally with a roofing felt layer for the roof.

High strength chicken wire was fastened with galvanized staples, which were then covered with a 1.5″ batons glued to the inside of the frame. This allowed the pigs to chew reducing the chances of their mouths catching on the staples. Whatever’s left of it can be filed smooth or removed and replaced.

The tools I had were sufficient to complete the job.

You can see what I used form the list below. Some of the items are no longer available so suggest the alternatives in the same category based on price and performance.

Very important to wear PPE when required. Always have these items to hand. It doesn’t take 2 minutes to don so do yourself a favor and apply when working.

Always have the following in your tool kit:

All edges and joins were sealed with wood glue.

I salvaged the hinges and bolts from the binned remains, which were the only items in a decent condition.

Tool Usage (approximate time in use)

All tools were more than capable for completing this task. Nothing hindered progress.
Battery life maintained throughout for the cordless drill and driver, neither requiring a charged.

Click here for a comprehensive review of the tools I used