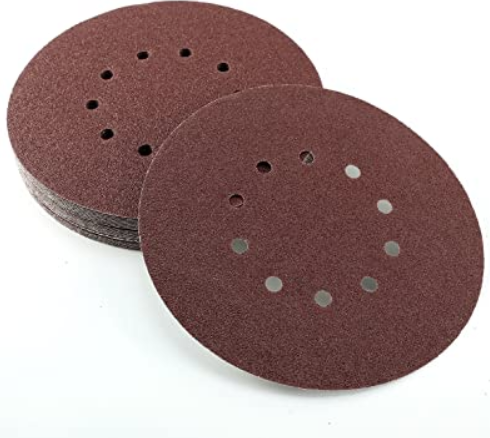 Sanding is an obligatory step in many wood and metal works.
The sanding process may even appear multiple times in a project: course graft when removing rust or old paint that to reveals the sins beneath to fine grades at the end of the project, giving the product a soft finish and revealing its true beauty.

To help minimize time and effort involved in manual sanding, palm sanders are a must have in every shop.
Although power comes from these machines, the sanding and, consequently, the results will be a true reflection of the quality sandpaper attached.

Selection is a crucial step. What seems like endless hours of work heavily relies on it.
Thus, in this buying guide we’ll outline the most important aspects to consider next time you need sandpaper.

I’ll begin by outlining the standards used both in the US and Europe.

In the US, CAMI – Coated Abrasive Manufactures Institute, use a scale-based system (low to high numbers) reflecting the coarseness of the sandpaper – low = very coarse (40-grit).

This number rises as the grit is smaller (less coarse)

In Europe the FEPA – Federation of European Producers of Abrasives, use a slightly different scale-based system though the principle is the same.
The letter ‘P’ precedes the grit number on the sandpaper

The list below outlines the corresponding grades between the two standards:

The first factor we’ve to consider is the grit size, which refers to the amount of abrasive particles per square inch, and, in turn, depends on the size of the particles.
Smaller grit sizes correspond to bigger particles and thus a more coarse paper; conversely, the opposite occurs with higher grit sizes.

We can classify papers according to grit size ranges (or measures of coarseness):

You can of course get very high grits of paper depending on the project. I’ve recently used

Next time you are purchasing sandpaper for your palm sander, remember there are 2 important things to bear in mind:

You may find these articles useful:

Why you SHOULD buy a Palm Sander