What Chainsaw did Leatherface use? 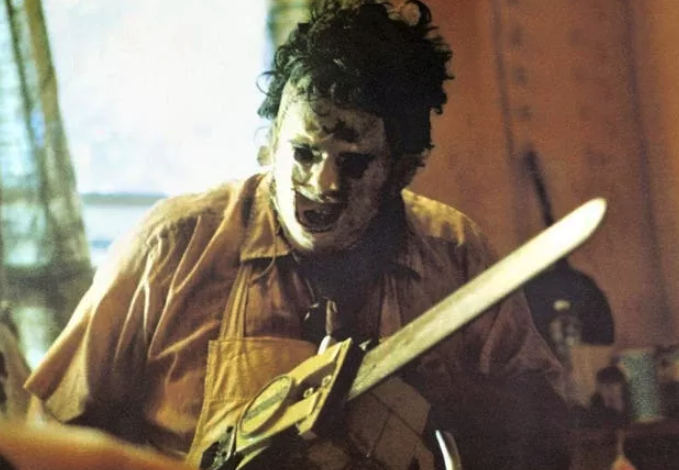 A Tribute to the Chainsaws that made us scream

Aside from designing, building and reviewing wonderful power tools,  I love watching films and am a HUGE horror film fanatic.
Stick on a ‘classic’ pre-90’s, gore fest and I’ll be hooked. Like good tools, they stem from our basic needs. Give us something thats simple yet effective. Something we can bludgeon, hack and bore holes into. Indeed!
There’s also something amusing and equally terrifying watching lashings of claret flying around the place whilst some poor, confused sucker, unbeknownst to him is getting closer to sealing his untimely and pain-filled fate.

So lets start by bigging up the master of the motor, Leatherface himself. 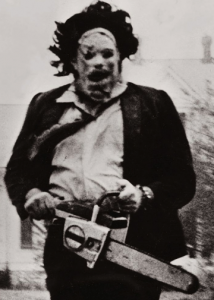 Not because of his hit ratio. Its his psychobility, the sheer intimidation factor and chilling unpredictability.
Of course, he is a true icon of horror cinema for all those reasons but my real admiration is the way he handled those chainsaws.
Leatherface was totally unhinged. He was about 7ft tall and weighed around 300 lbs so that in itself would be enough to cause a small sewage plant in my pants! Couple that to running full pelt, with or without a bloody chainsaw it somewhat an alarming prospect to say the least!
But arming him with a mallet and chainsaw! Come on now.
That’s terror beyond terror.
He became a total and utter monster, to be avoided at all costs.

I’ll never forget the scene that introduced us to Leatherface.
What the hell was my man, with his summer attire thinking? Maybe that was a metaphor for things to come!?
He should have known better than to be wandering around a most unpleasant and unwelcoming abode. Anyone would have taken the hint and vamoosed after 1) seeing the skulls on the wall and 2) hearing squealing 3) the horrific decor of the house.
Instead of shouting ‘hello’, ‘hello’ I’d have quickly realized somethings not quire right, spun 180 and sprinted faster than Ousane Bolt in the other direction.
Surely it must have reeked of death, but hey, someone needed to get whacked so why not be the nice guy with his chest out.

But then! BANG! The monster enters reality. BANG! Slamming that metal door shut after clubbing the poor fella set the tone for what was to become a truly terrifying 90 minutes of all-too-real butchery, gore and fear.
Totally and utterly brilliant!

So, the question is, what chainsaw did he use? 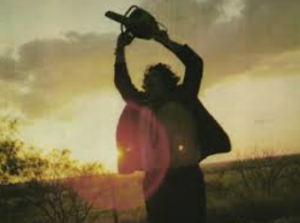 In the original, Gunner Hansen can be seen striking fear, terror and mallets into anyone within 5ft of the house. His primary weapon of choice was a Poulan 306a, weighing a substantial 13 lbs. Picking up one of these and running at full pace makes ones chances of survival slim at best.
And being a big, strong man certainly gave power to the scene when he danced about at the end, spinning round and round maniacally, waving the chainsaw over his head.

Looking at the chainsaws construction compared to whats made now you’ll likely notice a distinct lack of safety features.
Even a hand guard would have been a nice touch!

These chainsaws were renowned for their reliability and were a popular choice in the 70’s. 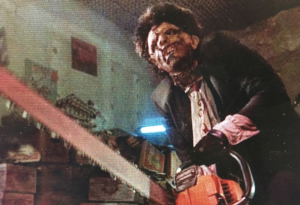 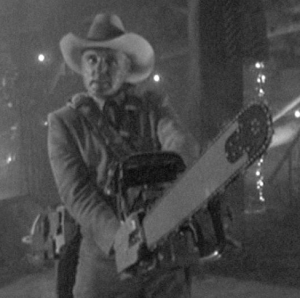 The sequel was released 12 years after the original, and despite making a decent profit at the box office it was never, ever going to hold a light to the original.It did, however, have some pretty scary scenes and displayed not one but two different chainsaws; the Craftsman 4300 and Sachs Dolmar 112 24″ used by Lefty Enright when fighting Leatherface.
Thats a proper Deathmatch!

Dennis Hopper is a psycho at the best of times but putting him up against Leatherface, this time played by the equally intimidating presence of Bill Johnson was a feast for curious eyes!

The Sachs Dolmar 112 does incorporate some obvious safety features and has a respectable 24″ guide bar so chopping limbs is as easy as taking down some hefty trees.
I believe these saws are still going strong!

This time we’ve got a pimped up Stihl 034 aka The Excalibur Chainsaw to wave around at people heads in the less than impressive eponymously titled Leatherface.
Arguably the chainsaw is the star of this show in its chrome jacket with nasty spikes at the base of the guide bar. Charming! 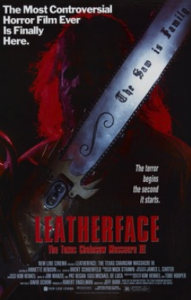 Sadly, not for sale on the retail market the originals from the film $3000 each to build and were designed for the film.
I’m sure this savage beast would been better than the actual film itself, selling at auction for around $11000 in 2012.

Texas Chainsaw Massacre: The Next Generation (1997)

Well, I don’t know about you but I certainly preferred Star Trek: The Next Generation.
The thought of the slightly-built Jean-Luc Picard swinging one of these around would be far more amusing than this bizarre offering from the franchise, that even boasted Matthew McConaughey and Renee Zellweger in the cast.

This time, the next generation used a McCulloch 700 to perform the dastardly deeds.

Robert Jacks had the fun task of swinging and hacking this time round to equally devastating effect though despite the blood, gore, superstar cast the film was rather rubbish.

The real star was the capable, compact and yet thoroughly unassuming McCulloch 700.
Often mistaken for the Poulan, it was mildly popular in the 90’s…unlike the film. 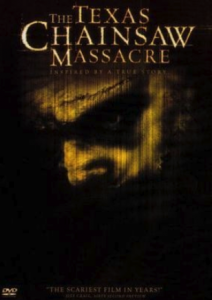 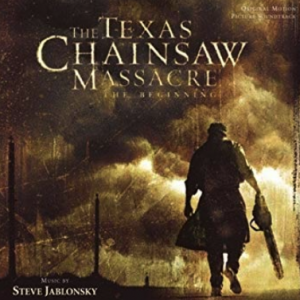 The poster for the 2003 remake was sinister, dark and had genuine menace despite the somewhat sad eyes of Leatherface, this time played by Andrew Bryniarski in both movies

Now, I’ll be honest and state I did actually like both of these films. Various review sites rated the remake pretty low though it was truer to the original than previous efforts.
The 2006 Prequel was marked slightly higher.
Also had the late great R. Lee Emery as the unlikeable father. In fact, none of the characters were particularly likable but in terms of keeping you uneasy, it worked. For me anyway.

Leather face wielded a Husqvarna 359, thats still marketed today and going strong. The one in the movie had a custom bar installed.
Reliable, compact and terrifyingly competent. 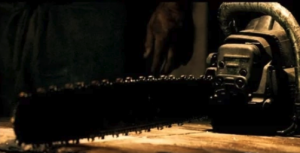 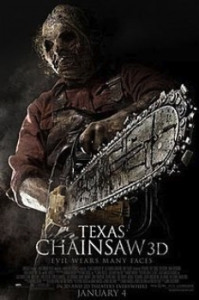 Of course, this was bound to happen as some point, especially at a time when 3D TV’s were so popular.
Horror films were the default genre to latch on to this resurgence in technology and did a pretty good job in the main.

Now, I cannot get a reference to the chainsaw Leatherface used in this film, ably played by Dan Yeager though will update as soon as I can.

The saw certainly appears to be well used and abused. Am happy to see Leatherface remembering to engage the chain brake before bludgeoning all and sundry. 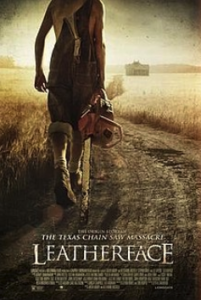 English actor Sam Strike plays the eponymous Leatherface in this latest offering in the TCM franchise.
The film is actually a prequel to the original 1974 film that explains the origins Leatherface.

Unfortunately I don’t know the make or model of the chainsaw being brought into horror existence but again will update asap. 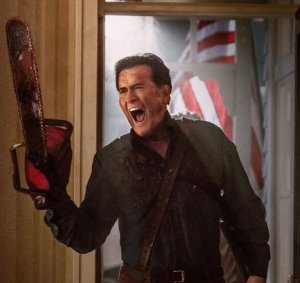 Ash, turns to the chainsaw to dismember his possessed girlfriend, but alas cannot.
Here he uses a Homelite XL-12 Chainsaw before relenting, unable to carry out the deed. Ada-boy Ash.

In Evil Dead II Ash severs Linda’s head in half. He then brings it out again to self-sacrifice his evil right hand before making it part of himself by attaching to his arm. Good man!

My father was a fan of Rod Taylor. I remember watching H.G Wells ‘The Time Machine’ feeling amazed at the possibilities. Then weirded out in Hitchcock’s ‘The Birds’.
Then I watched Dark of the Sun. Dark indeed. 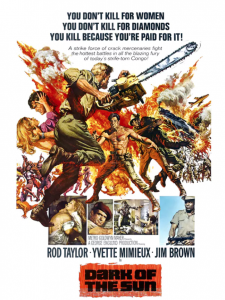 A tale of war, torture, adventure and ultra violence, especially back in the 60’s where subjects still had much too much taboo associate with them.
Look out for the chainsaw fighting scenes. Horrific and terrific. 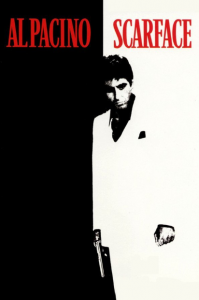 I only watched this film in 1999. I doubt I’ll ever forget the shower scene.
Nuff said. 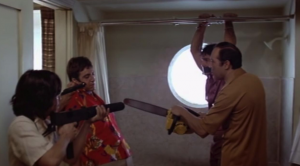 or from the Payday 2 game, the Lumber Lite L2