Why children should pick up power tools in the 21st Century 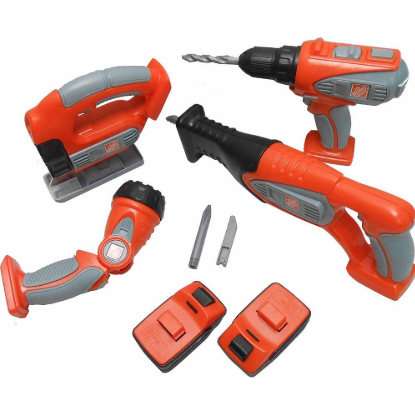 Frustration plus fascination drove me to explore the insides of my ZX Spectrum RGB Interface connecting the TV to my home computer.
I wasn’t seeing full color on my 14″ monitor so deemed the RGB interface the culprit.
At 11 years old, playing on the computer was far more important than watching TV.
Horace Goes Skiing, Frogger, Paperboy and Spy Hunter isn’t much fun on a fragmented, jarring split-screen of 2″ pink and green columns. Something needed to be done.
By yours truly.

Armed with a Philips screwdriver and magnifying glass I decided to investigate. Just a quick visual, nothing more; I didn’t really know the ins and outs of what lay inside but felt an investigation was necessary.
Inevitably, I spotted nothing obvious.
No blown circuits. No melted resistors. Nothing recognizable in the otherworldly, mega-city of micro-structures dotted around a board of green and brown.
Upon lifting the hood did unlock a world of genuine interest.

Curiosity to explore and learn, test and resolve can be credited to the hours spent hanging around my dads garage cum workshop as a youngster.
Via osmosis or actually paying attention the trials and errors of my dad – chief tinkerer and improviser extraordinaire did nothing short of inspiring me to discover what caused stuff to fail.
He wasn’t an engineer by trade (he worked for the immigration department) but his motivation, I later learned was impelled by necessity, practicality and pragmatism. And if we are anything like each other, curiosity and working to a budget.
Save money, do it yourself and learn something – a maxim he bellowed frequently. And one I still adhere to.

He is mechanically minded and simply takes on challenges thrown his way. I’d dare say he enjoyed the nitty gritty despite the limited resources available. Compared to the wealth of information at our disposal today his resourcefulness was pretty darn amazing.
And yes, there were a few times he needed help, be it to double-check a diagnosis or just source a spare part. His go-to man from way back when was Uncle Bob.
A jovial mountain of a man, his tips n’ tricks got dad out several fixes. Forty years plying his trade as bus & truck mechanic, he knew a thing or two about how things should work. I recall eternally lengthy conversations with language totally alien to me. Numbers, codes, textures. ‘Do you have one of these?’ ‘If you use one of these then…’
Before the call was through inevitable laughter followed before making plans for the family do.

Never be afraid to call on help.
If in doubt, ask – it’s all part of the upwards curve.

From taking our first steps as toddlers to pursuing the meaning of the universe we have an innate desire to learn.
Inquisitiveness. Aspirations. Curiosity. And ultimately a desire to succeed.

As a 7-year old handing out tools to my dad, watching him toil whilst scratching his head then amazingly bringing some system to life was simply fascinating. It looked like he was actually doing something. Injecting life into a bunch of cogs, rods, wheels, wires and all sorts of bits appeared nothing short of a miracle.
Through many cold days and even colder nights I stood around, providing meagre but vital assistance. But just being there, filling a small, albeit engineered role gave me purpose, and more importantly allowed me to spend time doing something worthwhile with my father.

Being motivated – Doing what we love

Foundations of logical progression, I believe, along with innovation and gumption are core components in mental health and mental stimulation; key to how we should evolve. We surf a transmogrified world often with minimal input or little control.
Believing we need stuff has polluted our minds. And worse still believing we need to continue replacing stuff we didn’t need in the first place. Not having a conditioned response to investigate basic cause and effect is of deep concern.
More of ‘this’ and better versions of ‘that’. The answer is, we don’t NEED it.
And let me reiterate – I AM NOT AGAINST DEVELOPMENTS IN MODERN TECH. Anything that improves our lives, our well-being, our ability to enjoy really connecting with our acquaintances, friends. and family gets my vote.
I genuinely love and embrace innovative technology. If I feel it can better my life, and can afford it, I always consider how much value it may add before parting with my hard earned.
My point here is simply to invest, just a bit of time to find out what these pushers are peddling.
Delve a bit deeper rather than passively accept.

Take computers for example.
I’m completely aware how the computer lexicon can be utterly confusing and downright intimidating. Technobabble, is baffling to most, I get it.

Most clever marketing teams break it all down. Simplify and highlight what you need to know.
They headline what’s relevant to get things up n running, list general product details and offer disclaimers so us laymen can grasp the operation & maintenance basics.

Breakdowns of whats-in-the-box and ‘this is how I did it’ instructions are nothing short of revolutionary. Prior to Youtube, a truly seminal site, Instructables, How Stuff Works, et al paved the way for this new, pragmatic form of education. But, and herein lies the problem, how many people are accessing these sites to actually learn, garner interest and potentially grow over and above the initial search term or query?
A few? definitely. Many? not really.

Youtube is a brilliantly fabulous portal for sharing and connecting.
Virtually anything ever done or referenced can be sourced through motion picture. It’s the daddy of resources.
This winter I had the misfortune of one of the headlights blow a bulb on my car, and not wanting to pay someone to fix it, my obvious resource was the aforementioned Youtube and its bountiful wealth of treasure. The search wasn’t prolonged and indeed found a number of suitable videos to replace the part, albeit with mildly contradictory accounts of the best method.

Job done, I did the usual Youtube 10 degrees of separation, scrolling from VW headlight bulb repairs through to McCarthyism, with a rogue 4-minute music video watched over 60 million times, en route.
Nothing new there. But I then did a bit more searching.
There were scores more in my immediate view with viewing figures going into the billions! THE BILLIONS!!! A little bit more digging unearthed a multitude of videos showing footage of gameplay, most attracting a modest 1 million views in comparison.
Looking back through my own recent history I found most videos relating to TED Talks, guitar equipment, philosophical debates, and a series of Royal Institution lectures by prominent and influential scientists.
The latter are to me, priceless.
A presentation of amazing facts, wonderful experiments, presented by dedicated scientists passionate about the wonders of science. Viewing figures barely touched the 100k mark.

I love my music and have absolutely no objections to anyone indulging into arguably the greatest art form ever but in relative terms, to barely even glance at the bonanza of fascinating, inspiring and important educational information on offer is a truly sad indication of how we are made to think rather than how to think.
Viewing statistics representing a genuine microcosm of 1st-world society and motivates growth.

Social skills, standards and core values have been jettisoned in favor of cheap thrills and parrot-fashioned solutions. The core of the new norm is sustained high-level thinking, acting like a gangster and laughing at someone failing.
Or maybe I’m being naive and it was always this way, just a different version.

It’s not everyone, of course not but I’ve seen this attitude way too often.
This cannot classified as an anomaly in society.

And a mere generation ago, retro-futuristic fantasies promised us other-worldly, Back To The Future II-esque solutions, providing not just practical ways to simplify life’s routine chores but also added a sense of ambition.

Don’t get me wrong. I’m unlikely alone in the quest for a device that actually vacuums the house as you would; without cutting corners. One that takes itself up the stairs or a contraption that tidies up all your mess, putting things in place exactly how you’d want them.
This type of appliance are, in my opinion, worth the effort of pursuing as they genuinely free you up to work on more interesting things.

Watching shows like Tomorrow’s World gave so much hope for future technological wonders. Playground discussions as a kid usually involved what we watched on shows like TW. It inspired me to take up engineering.

Then the digital age really arrived and a revolutionary switch was flicked. An in the space of a few years the had world changed. Communications changed. Broadcasting changed. Transactions and interactions changed. Access to information changed. Everything changed.
We changed.
We stopped thinking – software did it for us. One click responses.
We stopped moving – interweb communications meant getting anything you wanted whenever you wanted.
And we stopped talking – email, SMS & social media took care of that function and spawned a generation of virtual, long-lost friends and keyboard warriors.

In just over two decades we’ve succumbed by choice or simply force of habit into becoming all but dependent on the multi-conscious might of the digital guff in the digital age. Its omnipresence stretches everywhere regardless of caste, class, cost or creed. Slowly but surely the foundation laid by the founding fathers has penetrated all four corners of the matrix and its impact has literally changed minds.
Digital revolution is often portrayed as the panacea for ‘bettering’ our lives.
Of course, there are some truly breathtaking, life enhancing developments provided by digital advancements across the technological spectrum, from health care and entertainment to buying stuff and finding our way around the planet but on the flip side, and the this is a significant flip side, there has been a serious cost to ourselves.
We’ve forgotten how to be.

So invested are we in apps, games, channels, feeds, chats, posts, tweets, etc that our immediate focus is to gaze, blankly 12 inches in front of our noses and succumb to the governance of a 2 x 6 screen.
All answers are there.
And perhaps they are – technology is truly brilliant.
But let’s not forget – so are we.

How do we test our aptitude? And build our character.
If engagement with other humans is being excessively virtualized day-by-day do we really know beyond the superficial?
I want to be challenged. Furrow my brow in deep thought at the systems and sub-systems. Spend time on unravelling reasons behind a decision or conclusion.
Or simply bask in the minute satisfaction of actually having worked something out to make a difference.
Am I missing the point or just missing being human.

Forget the obvious cliches around social media and friends you never see. Make a point being with your friends. Have tangible interactions. Make plans and stick to them.
Do something, together. Have fun. Build something. Talk face to face. Not face time to face time.
Lose the phone when you are with someone. Hide it, leave it at home, zip it away.

Indifference to Making a Difference

Having a role model who influences, encourages yet also gives you the freedom to choose is so important.
My old man would rather not be messing about with broken equipment but when called into action he was thorough and followed through, wind, rain or snow.

We occasionally venture into territory out of necessity but why let these be one-off ventures!? Make it an adventure of discovery.
If you can follow the instructions from someone dedicated to a trade or simply someone who just needed to change a car headlight and uploaded a video, be inspired. Be grateful that someone wants to share. Someone wants to teach, to educate.