Why you SHOULD buy a Palm Sander 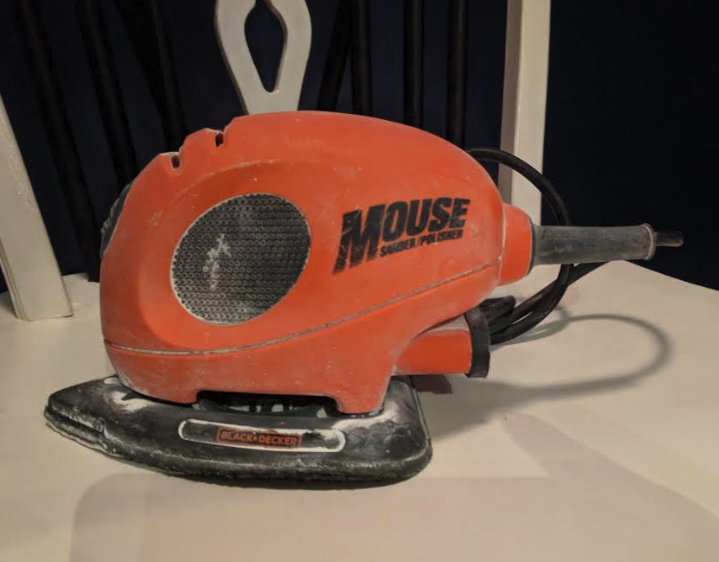 This post is in response to an article recently read which cited 3 reasons for NEVER using a palm sander.
My response counters the points made against the palm sander and its good name. I believe my case not only vindicates it but recognizes it a worthy addition to a creators arsenal.

Being someone who uses a variety of sanders around 3-4 times a month, both at home and in the workshop, I was curious as to content of this article, written with such disdain and positing baseless objections against to a tool I’ve used often and had many successes with.

Let me begin by giving what I believe is a global standard when undertaking any DIY project or building work; get the job done as accurately, as effectively, as efficiently and as safely as possible.
The underlined ‘as possible’ could indeed be seen as relative, if not mildly ambiguous but is an indication of quality based on the experience of the maker involved.

If you are not a professional contractor nor work in an environment that doesn’t deal with building, finishing or modifying types of woodwork, carpentry or joinery then it’s highly unlikely you’ll be using ANY specialist tools repetitively, let alone three of four times a year.
Unless you are a DIY enthusiast or working on a specific project, how often, honestly, would you be using any tool consistently?

What tools do we use most often?

Drills are probably the most used power tool. Drilling and screwing in/remove stuff is commonplace in most shops or households around the world.
Next would likely be saws of one kind or other. Jigsaws, chainsaws or circular saws.
After that, air tools perhaps? Compressors with associated tools for inflating, nailing or fastening.

So, in terms of tool usage we have a variety of drills, saws and compression tools that take care of the general, bordering specific DIY jobs, which I’d put forward as the most commonly used power tools.
Would sanders come next? Perhaps.

You may deem some of my remarks facetious or perhaps even pedantic but its not my intention. I’m attempting to convey, first and foremost, a response to a position I feel has been inadequately presented with minimal research or good evidence to justify a position.
My aim is not to discredit the author but to highlight how this type of analysis, and subsequent presentation, is far from useful to anyone that needs a fair assessment, that’s as objective it can be, when considering the purchase of any tool.

To reiterate, my post is a response to the 3 objections highlighted and those alone.

The remainder of their original article cites tool alternatives, techniques and accessories, which I have not explicitly referred to as they segway from the scope of my response.
Its conclusion summarizes their objections that after you have digested my retort, you may deem their challenge to the worthiness of the palm sander as moot.

Here is a another link to the article I’m addressing.

The extracts from the 3rd party article are in green italics.
My comments in black

A palm sander is one of those tools I bought thinking I would use all the time, but the fact is, I NEVER use it. It vibrates like a jackhammer, it’s difficult to change the sandpaper and it actually scratches the wood of my DIY furniture projects. What a dreadful little tool! Today I’m sharing why I NEVER use a palm sander, what I use instead to sand my DIY furniture and three of my favorite sanding tips.

Its folly to posit a view based on zero specifics then go on to generalize on negatives without specifying make, model or comparative factors. These characteristics determine a fairer assessment.

The article then introduces the 3 reasons against using it.

A palm sander works like this: a plate is mounted to a motor that spins in one, circular direction. Wanna try an experiment? Hold your palm sander in mid-air and turn it on. The rotation of the sander motor makes the sander twist and it virtually becomes a mini helicopter in your hand. Imagine trying to steady this mini helicopter while attempting to sand your furniture project – NOT FUN!

Trying to keep the mini helicopter from spinning while trying to sand creates a jackhammer-like effect on your hand. The longer you sand, the more you tighten your grip. This wreaks havoc on the tendonitis in my wrist. Just a few extended sanding sessions with a palm sander leaves my hand feeling more like a numb, tingling baseball mitt instead of, well, a hand! A palm sander might be the reason I visit the acupuncturist and massage therapist regularly LOL

Whilst I agree that effects of prolonged sanding will have a detrimental affect on your hand and wrist, applying the appropriate pressure, using correct handling techniques and sensible usage shouldn’t leave you needing massage therapy.

I’ve used palm sanders longer than I should have, also experiencing a sensation of numbness crossed with pins & needles that lasted about 45 minutes but now take regular breaks when using ANY SANDER, especially if getting tired or sore so not to experience consistent discomfort.

Palm sanders are sometimes referred to as 1/4 sheet palm sanders. They use sheets of sandpaper that have been cut into quarters. To cut my sandpaper I usually fold the sandpaper in one direction and then in other. The feel and sound of sandpaper against sandpaper makes me want to heave! That feeling and sound for me is like the sound of nails on a chalkboard for some people – GROSS!

Again, I agree that certain models have an awkward system of holding the sandpaper on the base.
Unlocking the clamp to fix the paper is not the the issue for me. Its the shape & size the sandpaper needs to adopt to stay in place. Cut correctly, it will.

Yes, the paper can take longer than expected to house the first few times you use it but once you have the technique down pat you should be able to bend the paper in place and lock the clamp that secures it without having excess paper flapping about.

This method of fixing the sandpaper is not exclusive to palm sanders.
My Black & Decker orbital sander uses the same system.

So what project are you using the palm sander on? How much pressure are you applying? What grit are you using? Have you cut the squares to the correct size?
Oh yeah, what model are you using…?

I saved the best, or should I say the worst, for last. Earlier I mentioned how a palm sander works. The sandpaper is attached to a plate which is mounted to a motor that rotates in one direction. That single, circular rotation sands “figure 8’s” into the surface of your furniture project. And these figure 8’s are difficult to sand away. The tool that is supposed to be giving you a smooth finish is actually scratching figure 8’s into the surface of your project – WHHHYYYY?!!

If you leave the sander on a surface without applying any pressure then turn it on, it will indeed move in a figure of 8 pattern, however I doubt this technique is ever adopted by anyone sanding.

And what you actually ‘explained’, was the direction of rotation of one particular type of palm sander.

Its quite clear this article has been poorly researched then presented with the musings a frustration.
I get it. Power tools are often tricky to use. Their weight, power and dynamism can be intimidating, initially throwing us off kilter but surely with practice and constant exposure you will become a competent user. Of anything.

So, in conclusion I’ll state my final point by referring to the last group of questions. Questions, which of course should be the defacto position of anyone analyzing information, importantly with the potential to influence decision making.

If this were an essay submitted for assessment, the red pen would be straight out with ‘SEE ME’ in pt 74, starting on page 1.

I have used various palm sanders on several jobs and not encountered anything thats convinced me to ditch it or employ another tool to complete the job.

My missus picked up some second-hand dining table chairs that were close the the junk yard and worse for wear. All needed stripping back, which meant sanding off congealed grime, cracked lacquer, with chipped and splintered wood everywhere. I started with aggressive sandpaper then moved to a high grit for a smooth finish before priming.
The sanding was entirely completed with the Mouse and Makita as above.
Reliable, accurate and saved a lot of time.

The finished products below. 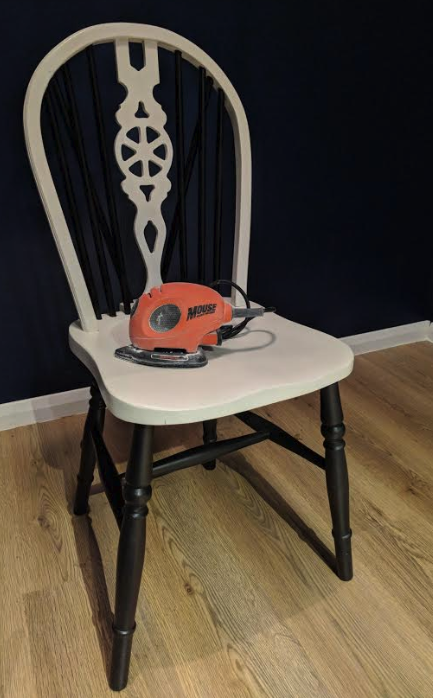 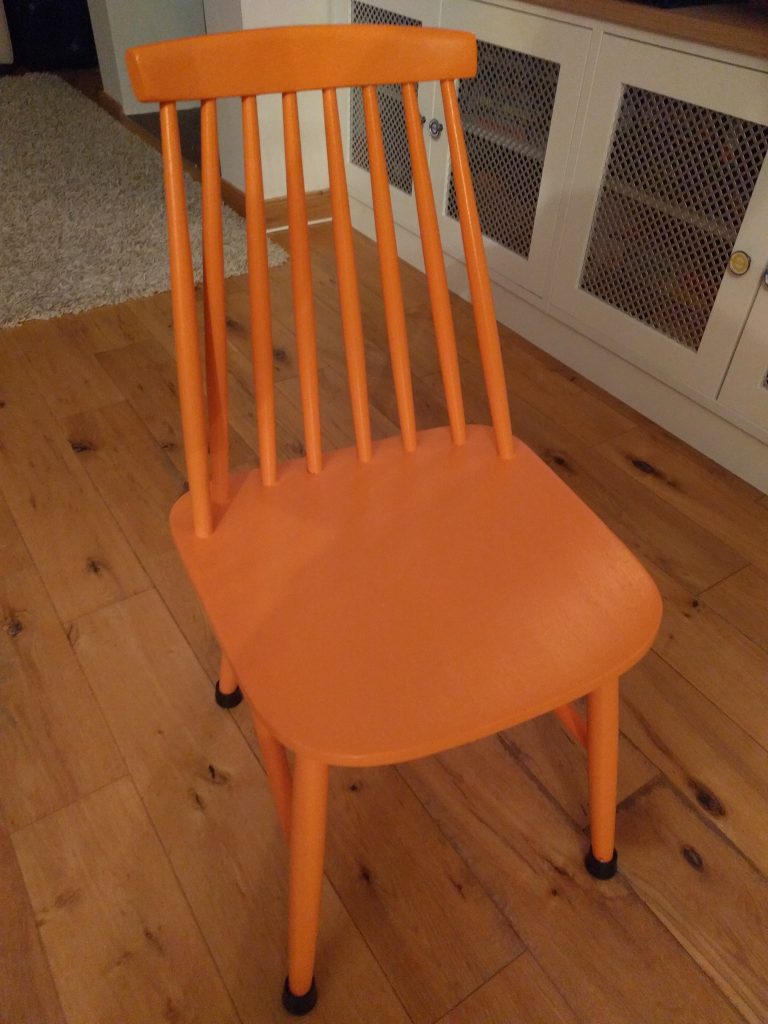 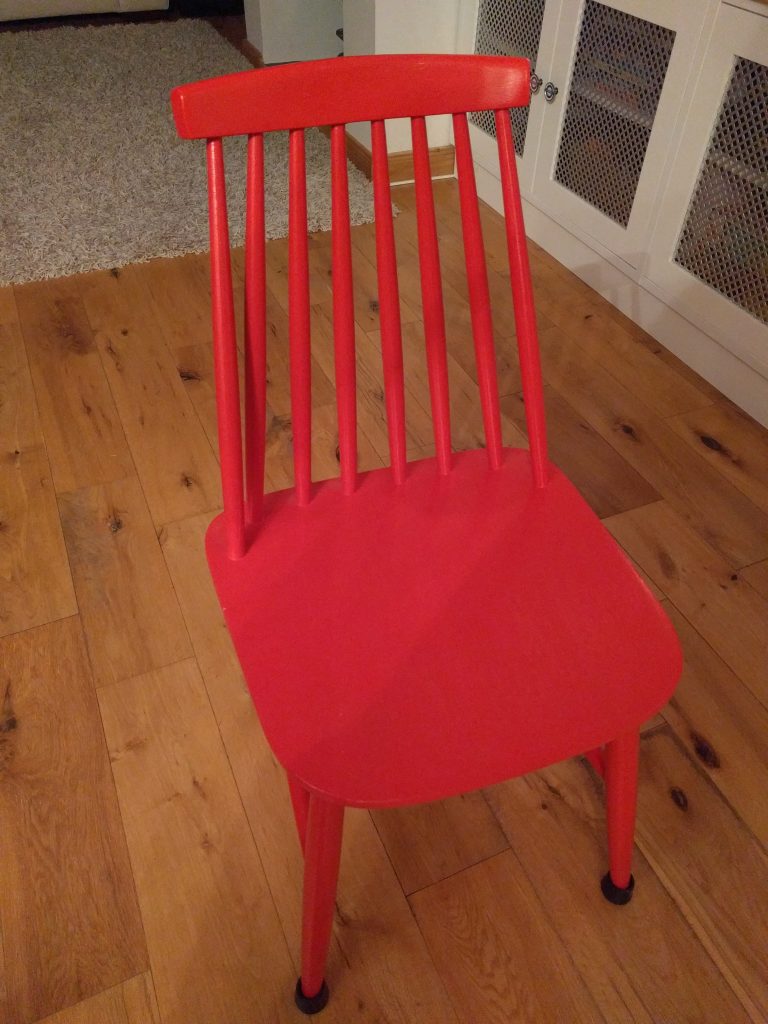 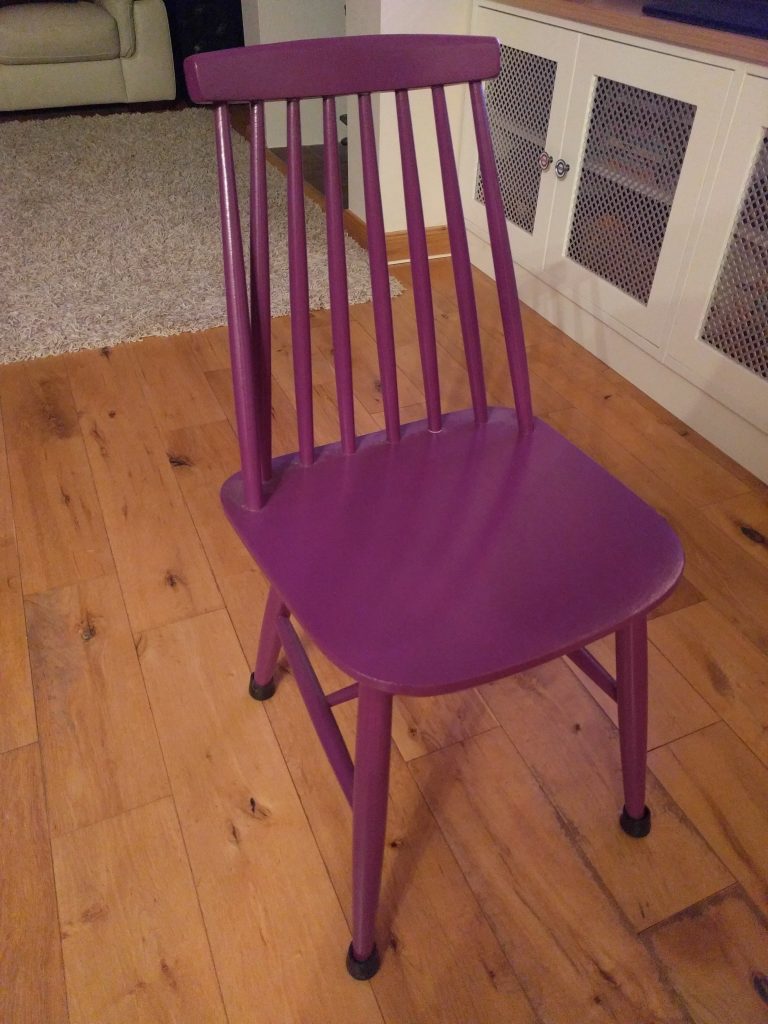 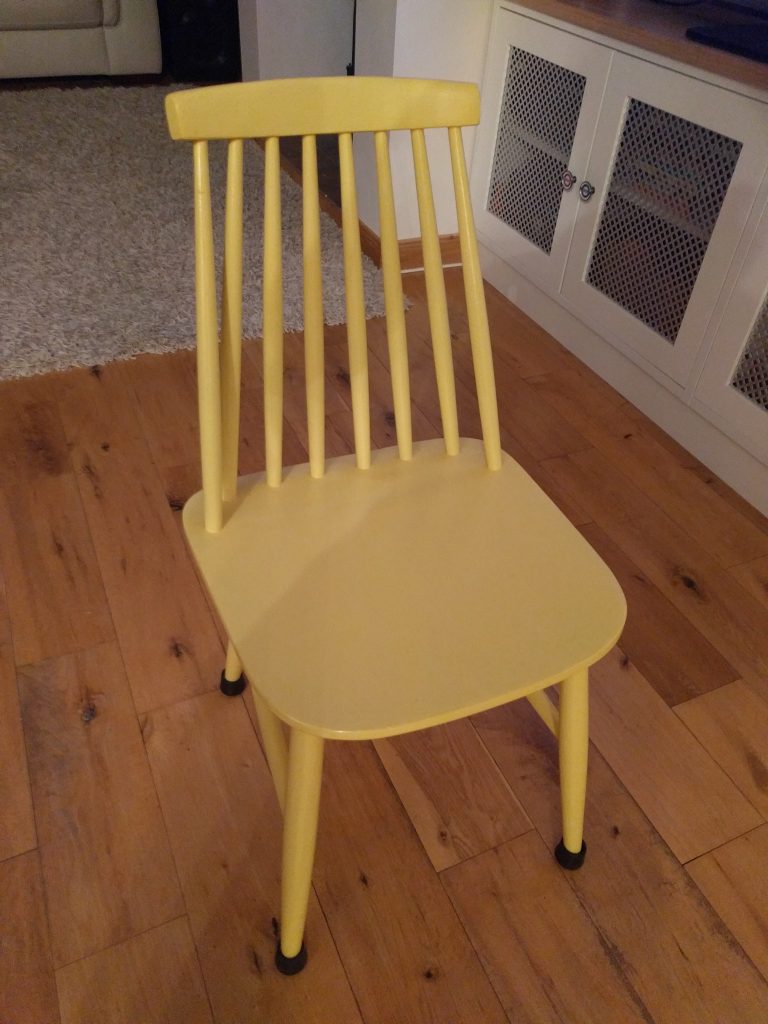 A selection of smooth, fun-colored chairs brought back to life, ably assisted by my 2 palm sanders so there!

These sanders had no issues getting in-between the spindles and took no time on sanding the laborious legs –
the most awkward parts to sand. Still, I managed to get the point of the Mouse sander into the narrow areas with sufficient power and achieved best results without forcing it.
I also employed a multi-tool with a triangular sanding head to positive effect.

Benefits of the Palm Sander

Benefits of the Random Orbital Sander

Once again, I agree with the benefits of using a random orbital sander, in it of itself.

Recently I sanded birch ply strips (about 200 lots of 2′ x 3″ curved lengths) and 8 x oak tabletops – both faces and all edges.
This took around a week to complete.
I used a Festool palm sander that did indeed rotate but guess what. I didn’t experience symptoms of helicoptertitus and the finishes were excellent.

Wanna know why these finishes were excellent? Testing, Testing and more Testing!

Based on the 3 points analysed, my conclusion is a simple call to reiterate the importance of evaluating evidence and an appeal to critical thinking.
Performing sufficient research and testing before submitting anything into the public domain should be standard practice.
Poor work deserves to be challenged, critiqued and questioned. It is frankly a dangerous way of making a point. based on little evidence, then emotionally, albeit light-heartedly, presenting a case that WILL influence people to think without thinking.

Palm Sanders are fit for purpose and like any tool I’ll ever discuss, with the correct application and practice, you will not run into problems. Its an effective tool that will prove its value.

The evidence presented to support this claim against the usefulness of the palm sander is weak and inconclusive.